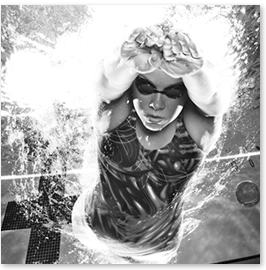 Although humans have been swimming for thousands of years, swimming only became a competitive sport in the early 1800s. Today, swimming is the third most-watched sport in the Olympic Games.

In 1875, Matthew Webb ignited public interest in swimming when he became the first person to swim across the English Channel. Swimming only breaststroke, it took him more than 21 hours to complete this feat. Thirty-one years would pass before another person would successfully swim across the Channel.

The Debut of Modern Olympic Swimming

In the early years of recreational and competitive swimming, breaststroke was the only stroke swum. In 1902, Australian Richard Cavill was the first to swim with an up-and-down kick and alternating over-arm recoveries. This stroke, dubbed the “Australian crawl,” was the beginning of modern freestyle. Johnny Weissmuller (who went on greater fame playing Tarzan in the movie of the same name) became the first man to break the one-minute barrier in the 100 Freestyle in 1912.

The next year the Channel Swimming Association was founded. The organization would not only establish rules for “crossing the English channel,” but have tremendous influence over the growth and development of open water swimming as a sport.

Butterfly Emerges as a New Stroke

As the sport of swimming grew, many swimmers and coaches began experimenting with new technique, particularly in an attempt to make breaststroke faster. In the 1930s Americans David Armbruster and Jack Sieg came up with the double over-the-water arm recovery and the dolphin kick, respectively, which combined to form butterfly. It was allowed as an alternative form of breaststroke until the 1950s, when it was declared a separate stroke. Also in the 1950s, flip turns, or tumbleturns, were first used in Olympic competition.

At the 1972 Olympics in Munich, Mark Spitz won a record seven gold medals in one Games, while sporting his famous “drag-reducing” mustache. (Later in life he would admit that the mustache provided no hydrodynamic advantage, and that he had made the claim in an attempt to psych out his Russian competitors.)

The following Olympiad, in 1976, swimmers were finally allowed to wear goggles.

Lynne Cox, inspired by Gertrude Ederle and gifted with a unique physiology, swam across the Bering Strait in 1987 without a wetsuit. Her swim was also a feat of international political persuasion, as it took place at a time when Cold War tensions between the United States and the USSR were running high. Later, she would be the first person, man or woman, to swim just over a mile in the icy waters of Antarctica.

In 1988, American David Berkoff and other backstroke swimmers demonstrated that they could go much faster by doing underwater butterfly kicks on their back than by swimming on the surface. As a result, Japanese swimmer David Suzuki and Berkoff, the Olympic gold and silver medalists in the 100 Backstroke, went more than thirty-three meters under water at the Summer Games that year. FINA quickly amended the swimming rules to state that backstrokers must surface at or before the ten meter mark. (FINA later revised the rule to fifteen meters.)

The Most Decorated Swimmers of All-time

Also at the 1988 Games in Seoul , Korea, Kristin Otto of East Germany set the current record for the most gold medals won by a woman in a single Olympic Games, with six.

In 2004 Michael Phelps tied Mark Spitz’ record of seven Olympic gold medals in one Games, and eventually beat it in 2008, when he won eight gold. One of those medals came thanks to an astonishing swim by his teammate Jason Lezak, who caught and ultimately out-touched a French swimmer in the 4 x 100 Freestyle Relay.

In the early 21st Century, swimming seems headed back to its open water roots. South Africa’s Midmar Mile race attracted over 17,000 entrants in 2004, setting a participation record for open water events. Accomplished pool swimmers began training for and competing in open water events. In 2008, the International Olympic Committee acknowledged the rising popularity of open water swimming and added for the first time a 10km open water marathon to the list of events contested at the Summer Games.

my cat read this and is now swimming 10 laps in my backyard pool. thank you

Grate info would have failed if not for this

i am doing reasearch, helped me a lot

Good info would have failed if not for this.

this was super helpful i would have failed class if not for this page. also did not know swim outlet had this.

Hey
The info is really good here. Helped with my HW. I did not know that swim outlet had this page.

will smith
5 months ago.

not really the info is not nice

HI THIS IS ALBIE

This is so interesting and this helped at lot with some school work I have.