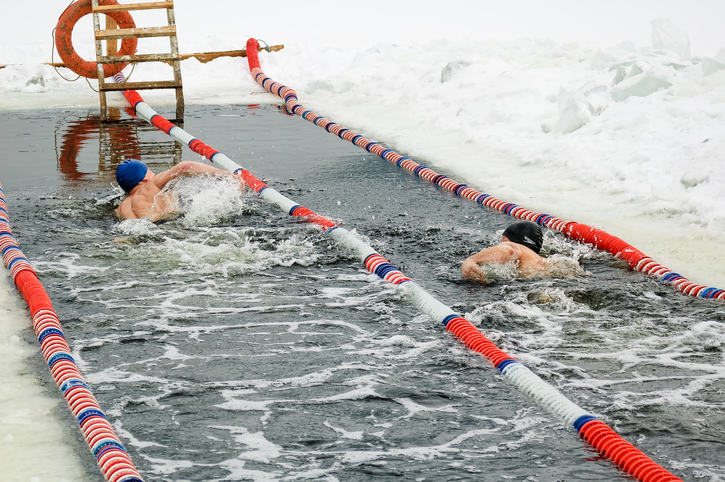 I bet you looked at the picture above and thought there was no way you were going to swim with those people alongside snow. But while you may not need to swim in such frigid conditions, there are actually several benefits to swimming in cold water that you may not expect. So, if you're considering taking the plunge, these benefits may be enough to get you to jump in!

Endorphins are your body's little pleasure drugs that get released when doing certain activities. Many swimmers who take the plunge into cold water emerge feeling energized. The reason for that is the burst of endorphins their brains release after the shock of entering the cold water. Endorphins can be released when the body is in pain to cope with the shock, and cold water gets the body close to that point.

It's a true, natural, high!

Cold water causes the blood to rush to the internal organs, working your heart like a pump. If you've ever seen someone start in a sauna, roll in the snow, then return to the sauna and emerge looking like a million bucks, then you've seen an extreme case of what we're describing in action. By boosting your circulation, you can flush impurities from your system all that much quicker.

Plus, if you are sensitive to the cold or an older person, you may find this benefit helps you enjoy the changing seasons all the more, as you will be more comfortable in colder weather.

It sounds like a joke, but it's not! Dipping in cold water can actually increase testosterone and estrogen, resulting in an increased libido for men and women. Boosting the libido can also lead to increased confidence, better self-esteem, and improved mood.

Because your heart must beat faster and work harder to keep your body warm, you will burn more calories in colder water than you would swimming in warmer conditions. It's no coincidence that those who swim in cold waters are generally thin.

Swimming in cold water is such a shock to your system that you may find yourself thinking about little else. This can be good, since it will take your mind away from the stresses in your life, such as worrying about the big test in a few days or whatever else has your stress up. With reduced stress comes an improved quality of life!

I swim every morning for the last two years in Hayden lake Idaho, absolutely the best feeling ever! The temperature this morning was around 27. Cold water swimming is a healthier exercise and easy on your body. I’m 61 and hike with my dogs plus yoga but since I started swimming, I feel healthier than ever! Love it!

Been swimming outside since March after pools closure; Covid-19! Still swimming with just a Silicone cap water temperature 70° F. Will see how long I can manage without a wetsuit. 2200 to 2500 m weekdays and 3200 to 3800 Sunday.

How cold is "cold"? At what temperatures does one gain all these additional benefits?

Acording to studies, water temparature above 20C is clinically good for the body.

So below 20C 68F is bad? So what range are we saying is good? 30C is above 20C. Is 30C cold water? Articles I've seen claiming these benefits have photos of people swimming in lakes that they had to cut holes in the ice. Pretty sure that water is below 20C.

I swim in an 80 degree outdoor pool all winter and in the ocean in summer when it's about 70 degrees. In winter the ocean is in the 50's. I'm thinking of going in the ocean sooner this year. How long is it safe to swim in the cold water? I usually swim about 45 minutes.

If the water temperature is 50 degrees or below, a quick dip is advisable. Staying too long is cold water can lead to cardiac arrest from cold shock. If you have a lot of practice over the years, your body becomes acclimated to the cold and thus you can stay longer 15 to 30 to even 45 mins.

I really want to do this. I have an out door pool in my complex and I am nearly 70 and I am convinced that starting a least once weekly will help to relieve joint pain including arthritis. Feedback from anyone. Thanks!!!

It should relieve some pain since ice is used to treat arthritis and many other reumatic illnesses in phisical therapy. Just be sure to enter the pool slowly and gradually.

I know these are all true. I love swimming!

The author has gone through so much thinking and research for writing this article. Thank you for sharing this great article with us. This blog is worth to read. Keep sharing this kind of post in the future. I’m also an author. So if you have time, I invite you to have a look at my https://vitrarange.com site. Have a nice day!

I live in a RV/remodel tiny house in the desert area of southern CA/AZ with access to a beautiful clean, from underwater, pond filtered thru an encircling, enormously thick ring of cane reed groves. Its the reason why I am able to stay here year round. When summer heat temps crest in the 'tweens, I sit on the dock ladder up to my neck in the water to chill out. It is also where I bathe with the sparingly use of a high~quality biodegradable soap (keeps the pond fish healthy). Although this pond is huge and deep, I do not pollute with personal product chemical wastewater. My grey water (from shampoo,conditioner/dish and laundry soap) is all bucket cached and dispersed elsewhere. All of this is to say I'm so grateful to find your website today to learn of the cold water plunge benefit to overall health. Initially will not pond~plunge (a senior who lives alone), but excited to know I can gracefully ease into water during winter for bathing purposes. Who knows? I may graduate to the 'plunge' before spring arrives!

this sounds wonderful.
I am swimming in Seattle at present daily to ward off the blues brought on my life's challenges.
Is this pond on your property or such?
Your living set up sounds like a goal I am pursuing.
Can you share any advice for to achieve.
I am serious, do not want to crowd your pond.
I know when there is a will there is a way.
But any technical thoughts would be appreciated.
Thank you