How to Improve Your Underwater Dolphin Kick 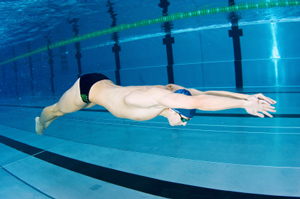 If you’ve watched Olympic backstrokers compete, you were probably blown away by their extremely powerful underwater dolphin kicks. The flexibility in their hips and knees looks almost inhuman. Trying to mimic these kicks can often feel impossible.

If you’re having trouble mastering these kicks, called underwaters, don’t get discouraged! One of the many reasons why they’re referred to as “The Fifth Stroke” is because they’re so difficult. They’re also important: Improving dolphin kicks can drastically improve your overall time in meets and efficiency in practice. If you want to make your underwaters more powerful, check out the following tips. 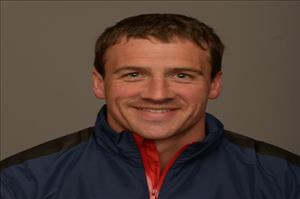 Getting to know Ryan Lochte: Lochte won gold at the Beijing Olympics in the 200 meter backstroke. Contributing to his success were his dominant underwaters. He's so fascinating that crowds have gathered to watch him demonstrate underwaters. For fun, Lochte swam 50 meters underwater for time: He swam it in 20.8 seconds. Many college swimmers don't swim regular freestyle that fast in yards!

When you think of kicking, you might assume that you use solely your legs. On the contrary, you should engage your whole body as you kick.

Why Use Dolphin Kicks

Flutter kicks, although quick, do not increase speed off the wall as much as dolphin kicks. Dolphin kicks are a lot more powerful, and incorporate more of your body than just the legs.

While practicing dolphin kicks, always keep your core tight. This will hold your shoulders still while you propel yourself with the bottom half of your body. Keep your arms completely still. As you push off the wall, tighten your stomach, straighten your back, and concentrate on having a relatively low amplitude kick.

If you have a large amplitude kick, then you’re increasing the distance of your swim. Think about it: Swimming in a wavy line is a much longer distance than swimming a straight line. Tightening your core will move your body directly forward, rather than up and down.

Practice on Your Back

Dolphin kicks are easier on your back. If you’re having trouble learning proper technique with your dolphin kicks, flip over and practice on your back. You can keep your core tighter while maintaining movement in your body.

Sometimes people kick very rigidly on their dolphin kicks. Instead of having a jerky movement with a pause at the end of the downward kick, try to keep your feet moving. As soon as your feet finish the downward movement, start to move them upward. The kicks should be fluid. You should feel a flow from your hips to your toes.

Hot Tip: Practice with Fins
In order to speed up the kick, practice with fins. Not only will this help you get the hang of the quick, fluid motion you need, but it will also strengthen your muscles for powerful underwaters. Fins will specifically help build the muscles in your ankles, calves, and core.

Many swimmers try to have large, slow dolphin kicks as they leave the wall. The dolphin kicks should be quick. Try to control the amplitude of the kick so you can speed it up. If you watch Olympians, their feet are almost a blur because they kick so fast. Watch it in slow motion, though, and you’ll see both the amplitude and fluidity of their kicks.

Sometimes it’s hard to determine the right amplitude the kick should be. Trying to maintain a “relatively low amplitude kick” can seem vague. Since everyone is built differently, every swimmer’s kick will be slightly different. In this case, you need to feel it out. 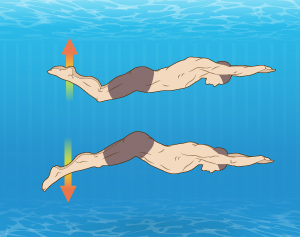 If the kick is too big, you will feel powerful. At the same time, though, you’re likely creating too much resistance this way. Ultimately, you’re exerting a lot of effort without moving forward that quickly. You’ll waste time and effort without much payoff.

If the kick is too small, you will feel fast. However, you won’t be pushing enough water to efficiently propel yourself. Even though you’re moving quickly, the kicks are still not as powerful as they can be.

In order to have the most proficient kick, you’ll have to find a middle-ground between the two. You need to find a way to incorporate both power and speed. Play around with the kick and try out different techniques.

Start with a really large kick. Time yourself to see how long it takes to reach your break out point. Just make sure that you’re breaking out at the same place each time. This way you can keep track of your time accurately. Then, kick as small as you can and time yourself again. After you’ve done this a few times, make adjustments to the kick and observe what helps decrease your time.

Now that you know how underwaters should look and feel, try them out. Practice different amplitudes of the kick, and see what feels best. With a little practice and adjustments, you’ll be kicking better in no time!