How to Do an Air in Surfing

Nobody knows who did the first air, but sometime, presumably in the late ‘70s, a surfer of immense skill and creative insight decided to launch his board out of the water, over the lip of the wave and back down towards the face before continuing his ride. It was the latest innovation in a sport bursting at the seams with progressive new ideas, along with surfers talented enough to pull them off.

Kevin Reed, Matt Kechele, and Martin Potter are among those recognized as the first surfers to go airborne. Influenced by the radical aerial maneuvers being attempted at nearby skate parks, the original aerialists utilized the new thruster surfboard design to its fullest, paving the way for an entire new generation of progressive surfing, and two young surfers in particular: Christian Fletcher and Matt Archbold. The two San Clemente surfers used their local beach breaks to pioneer new maneuvers above the lip, first with simple front side airs, and later with an endless array of variations, from board spins to grabs. 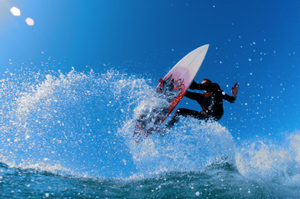 At first, competitive surfing took little notice of the latest trickery going down at select beach breaks, that is, until Kelly Slater came along. The Floridian wunderkind seamlessly melded traditional rail-to-rail power surfing with dazzling new aerial antics, and a new era in professional surfing was born.

Today, Slater is joined by younger surfers like Californian Dane Reynolds and South Africa’s Jordy Smith in mixing flawless carves and hacks with mind-blowing acrobatics. The progression continues at such a rate that the Association of Surfing Professionals (ASP) was recently forced to literally re-write the judging criteria for the 2010 World Tour.

The Air Up There

So how do you do an air, exactly? The actual physical motions required to launch above the lip are actually relatively simple, but in reality, landing a good air is extremely difficult. Just like performing an ollie on a skateboard, learning how to do an air takes considerable practice. And unlike skateboarding, you can’t repetitively practice it over and over – unless you happen to live near a perfect, un-crowded surf spot that’s routinely perfect for airs. For the rest of us, though, successfully landing an air will take a lot of practice, and even more patience.

Getting Up to Speed

As with nearly every maneuver in surfing, speed is the initial key when it comes to doing airs. Without ample speed, you simply won’t be able to lift off the wave, and you’ll look pretty funny when you try.

With that in mind, you’ll need to pick a wave that will allow you to pick up plenty of speed – the larger and more walled the wave, the more speed you’ll be able to get. Once you’ve found a good one, get moving down the line as quickly as possible. Pump if you need to, and stay low.

Now that you’re heading down the line with speed, eye a possible takeoff spot. Generally, you’ll need a nice vertical lip or a crumble to function as your launch ramp. Again, the bigger the wave is, the more speed you’ll be able to carry once you’ve found a suitable ramp. Airs can be done in small waves, but they require the surfer to manufacture more of the aerial motion.

Approach the lip more horizontally than vertically. If you come too strong off the bottom, you’ll lose valuable speed. Stay low, and widen your stance in preparation for takeoff. As you head for the lip, focus your eyes on the section you’re going to launch off. 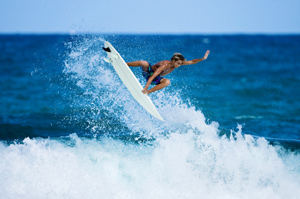 Use your upward momentum to lift up and out of the water, pushing off the tail of your board to lift the nose skyward. Once you’re airborne, flatten the board out in the air by straightening your back leg and pulling your knees up to your chest. Grab your rail or go hands-free, it's up to you - just remember to stay over your board.

Once airborne, begin to spot your landing by looking back down at the wave. Landing in the foam is generally the best scenerio, as that will be the softest area. As you come down, bend your knees to absorb the impact, and stay low and centered over your board. To complete the maneuver, just ride out of the foam and continue surfing the wave. Make sure to have your leash securely fastened as well, because the last thing that you want happening while you're making that landing it to have the board slip out from under you and lose control of it.

Sounds pretty easy, right? Not quite. Doing a nice little air takes years of surfing experience, so don’t get discouraged if you aren’t instantly launching five foot mute grabs over your buddies.

Keep practicing, remember that speed is key, and eventually you’ll be able to boost one of the most fun maneuvers in surfing.