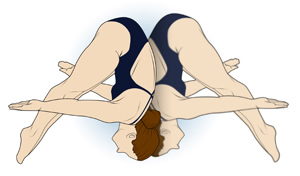 For over 90 years, the sport of springboard and platform diving remained unchanged. Only the 3-meter and 10-meter events were allowed in the Olympic Games from 1904 until 2000, when finally, the sport of synchronized diving was added to the schedule. It became an instant success and has remained a reliable crowd pleaser since its debut.

Synchronized diving (also known as synchro diving) is when two divers of the same gender perform similar dives at the same time. The result is a fascinating event with its own set of rules and guidelines for divers to learn and follow.

Synchronized diving has been around since the 1930's, but was not considered a legitimate sport as it was only performed at aquacades and diving shows.

All that changed in the mid 90's when in 1995, the sport debuted at the FINA (Fédération Internationale de Natation) World Cup competition. The thrill of watching two divers perform similar dives at the same time, along with a new sense of team unity that the event created, made the synchronized sport an instant hit among divers and spectators alike. Five years later synchro diving was added to the 2000 Olympic Games in Sydney Australia and has remained popular ever since.

Although diving is diving, the rules do change when there are two athletes performing at the same time. Here are six rule changes that make synchronized diving its own unique sport.

1. The Number of Dives

Synchro divers perform fewer optional dives than those in individual events. In addition two of the synchro dives are required to have a designated DD value. This makes the odds of winning a medal in the synchro competition greater and easier to achieve.

In the synchronized springboard event, one of the dives must be performed by a forward approach and cannot be done from the standing position.

The two dives can be different from one another, but they have to rotate on a similar axis.

The Final score is derived differently than in individual competition:

In an individual event, with five judges, the top and bottom score are eliminated and the remaining three scores are added and multiplied by the DD which results in the final score.

In order for a synchronized dive to look good and score high, the divers should be aesthetically comparable, with similar builds, heights and skills. This is important not just from a visual perspective, but also so that the dive can be executed at a similar height and speed.

The skills required as a team of synchro divers is also different than that of an individual performing alone. Even though the dives may be the same, trying to do one simultaneously involves a whole new skill set, some of which is outlined below.

Synchronized diving is a fun sport that is a welcome addition to the diving world. Divers and audiences alike are sure to see this new event become a dominant force in the future of the Olympic Games.