During a water polo match, all players (with the exception of the goalie) play both offense and defense. Learning the names and placement of the positions in a water polo offense are the building blocks of a team that can outwit their defenders and run effective scoring plays. This guide explains each position — and what that position does — in a typical water polo offense. 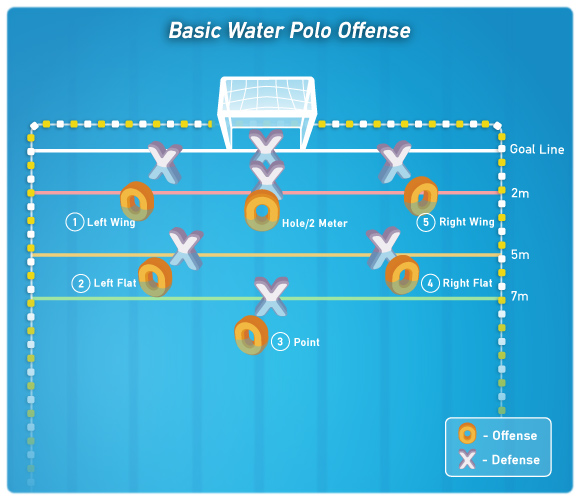 The most typical offense is known as a “set offense, called such because it revolves around the player in front of the goal known as the “hole set, the “set, or the “hole. Because this player has the most desirable shooting and passing position, they are also often the most heavily guarded.

Six players are allowed in the field at a time. They arrange themselves in two rows of three, known as a “three-three. The first row of players nearest the goal set up near the two-meter mark. The outside players in this row — the wings — will aim to be a few feet outside of the nearest goal post. The second row of players — the flats and point — arranges itself parallel to the first row, but near the five-meter mark.

The six field players consist of a hole set, two wings, two flats, and a point. Each position is numbered, starting with the left wing (position one) and moving counterclockwise around the “umbrella of players to end at the right wing (position five). Although technically position six — the hole set — is rarely called by its number. The position names, numbers, and where they set up during offense are explained below:

There are many options for plays and offensive strategies during a water polo game. Some involve all six field players, while others require just two. The most common offensive plays are explained below.

The most basic play within a set offense is for a perimeter player to pass the ball to the set who then immediately shoots the ball. This shot may be a backhand, a sweep shot, or a normal shot if they are able to get away from their defender.

Passes in a set offense to the hole set should always be wet. This means they land on the water a few feet in front of the set, not straight to their hand. Dry passes are too easy for the hole's defender or the goalie to steal.

Often, the set is guarded so well that they cannot shoot the ball but can still receive a pass to draw a foul. After the foul, they have three seconds to pass the ball to one of their teammates. In this case, one of the perimeter players — usually a flat — will drive down to the goal in order to get open. They may become open for a pass, but they can also pick off a teammate's defender to open someone else up for the ball.

Drives and picks can be run from any position in the water, but should be done so strategically. This means that if the set has the ball on the right side and their defender behind them to the left, the driver should go to the right as well in order to avoid the set's defender.

Communication is vital for a strong offense. With all the splashing, whistles, and noise from the deck, it can be challenging to know who is where and what is going on. During play, not only should the hole set be yelling instructions to their teammates, but players need to tell each other which plays, picks, or drives they want to run, as well as indicate when they're open for a pass or shot.

There are a few things on the side of the pool that offensive players should be aware of at all times. Some exist as imaginary lines in the water and are monitored by the referees, while others display information about the pool and the game's progress.

The goal line extends from the outer edges of the goal to the side of the pool. If a ball lands on the goal line, it is declared out of bounds and will be turned over to the other team.

The five-meter line is five meters from the front of the goal, and it also runs parallel to the goal for the entire width of the pool. Players on offense who are fouled on or outside of the five-meter line can immediately shoot instead of making a pass. If they do decide to shoot, it must be the first motion they make with the ball after the foul is called. That means no pump fakes and no waiting with the ball in the air for several seconds.

The Shot or Possession Clock

Each offensive possession has a shot clock that runs for 30 seconds. If the offense has not managed to score within that time, the ball will be turned over to the other team. The shot clock will be reset if there is an attempted shot or an ejection.

Every Position is Important

A good thing to keep in mind is that a strong offense rarely stays still. There should constantly be drives, picks, and passes to get players open for the ball. That means that while players may start in one position, there is a good chance they'll end the offense in an entirely different one. This even includes the hole set. It is important to know how to play each position since players are constantly moving around.

Another thing to remember is that while the set offense is by far the most common, there are other variations that your team may use. Learning the set offense will give you a good basis on which to build more complex offensive strategies.