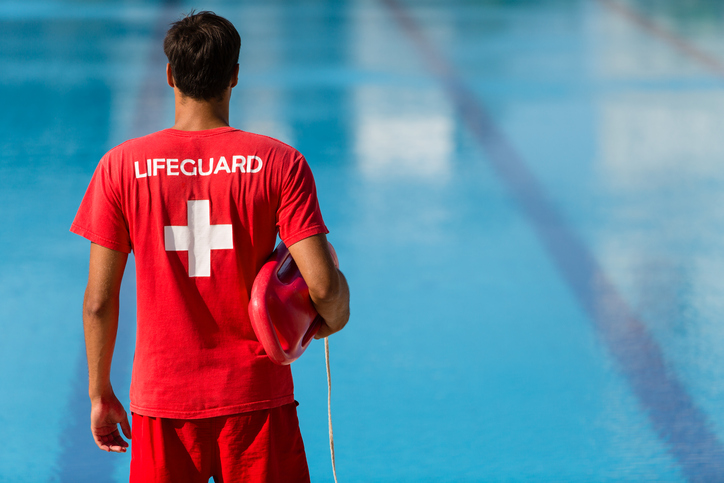 This article does not cover lifeguarding on oceanfronts.

After arriving at the poolfront, I was expected to assist with cleaning the lifeguard chairs and pool, as needed. I also was responsible for bring the floatation devices and first aid kits to their posts each morning. I needed to make sure they were clean and well-stocked for the day.

At the beach I worked at, there were two lifeguard chairs on the waterfront and two chairs at the base of the waterslides. Each chair had a floatation device and a first aid kit.

The lifeguards decided among themselves where each of us would start the day, and then we would go to the posts we decided upon.

We would begin at one post, whether a chair or the base of the waterslides. Each half hour, we would rotate and take up a new post. Rotating was good, since when lifeguarding, it can be very easy to lose focus and “space out. After all, you are looking at one location for a long time, and it is easy for your mind to wander. Rotating like we did helped change the scenery and refresh our minds. While we weren't allowed to leave the post, we were allowed to walk a bit around it, which also helped.

Even with that, it was easy to grow bored. It's very important for lifeguards to keep focused, because a lapse in attention could mean literally the difference between life and death. A good tactic I learned to keep focused was to “count heads. Essentially, while you watch the water, you count the heads of everyone in the water. Once you have a number, you count the heads again to ensure that the number matches up. This isn't a foolproof method, since sometimes people swim under water and people can leave and reenter the water at any time, but it can help!

Where I worked, there was never less than 4 lifeguards on any time, two at the base of the waterslides and two at the waterfront. The waterfront area was roped off, but at the deepest end the water could be over six feet deep. It was important to keep an eye on the children in the deepest end, since they could be swimming in water over their heads!

In front of the water, lifeguards were expected to watch the people swimming, enforce any rules being broken, and answer questions the people visiting may have, because you were often the only employee they saw. Fortunately, the only rules that were ever truly broken were too much roughhousing, and that was easy enough to address.

At the base of the waterslides, there was a small pool where the slides pour into. Lifeguards sat down near the pool, ready to jump in if need be. There were also walkie-talkies at the pool base, where employees at the top of the slides (not lifeguards) could talk to lifeguards down below. If a kid did not follow the slide rules (such as not going down on their back), lifeguards would tell them.

Rescues were rare. The pool at the base of the waterslides could create a fairly strong current with the water pouring in it. Sometimes children who were not strong swimmers would get caught in the current. Lifeguards would jump into the pool and take the child by the hand, pulling them back out. Once a woman panicked when she came off the slide, confused over which way was up, but after guiding her to the stairs, she was fine.

There was never a rescue at the waterfront.

The rotation schedule continued throughout the day, and we each got a half hour break for lunch worked into the rotation. One thing to note was that you could only use the restroom when you were moving to another station, since stations could never be left empty.

At the end of the day, I had to announce to the patrons that the waterfront was closed and they needed to get out of the water. I also had to clean up my chair, and take the first aid kits and floatation devices back to where they were stored for the night. If there was any cleaning to be done in the pool or on the waterfront, I would do that as well.

Once that was all done, I was able to go home. Day complete.

Some Things to Consider

Here are some extra tidbits of information I learned while working: