Why Divers Use a Shammy 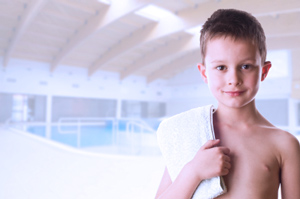 Diving is not an equipment-heavy sport. Essentially all you need is a swimsuit, a deep enough pool, and a diving board. But there is an extra piece of equipment that most divers feel they couldn't perform without: The chamois. A chamois — otherwise known as an aqua-towel or shammy — is a 13 by 17 inch water absorbent towel that you will often see draped over a diver's body.

For years divers have relied on this small piece of poly-vinyl cloth as a source of comfort and practicality: It dries a diver off in between dives, and helps to keep him/her warm and comfortable. Below are some interesting facts about the shammy and why divers use it.

The Purpose of the Shammy

The shammy is a portable, fast-drying towel that most divers rely on to ensure that they are comfortable and safe for performing their dive. When a diver gets out of the water, they are dripping wet, and often cold. Before their next dive, it is convenient to quickly dry off and be ready to perform without the annoyance of dripping water.

The shammy is crafted for this exact purpose. The poly-vinyl material enables the cloth to absorb a large amount of water. Once the water is absorbed, you can quickly wring it out and it becomes dry once again. This unique attribute allows the shammy to replace bulky cotton towels that stay wet after a single use.

When doing dives that include multiple flips — especially flips that require holding onto your legs (such as tuck and pike positions) — it is important to make sure your hands don't slip off your legs. If you don't have a good grip, you can easily slip out of the position and become out of control in your rotation. Using a shammy is one of the main ways a diver will avoid this situation: It effectively dries your legs and hands, and at the same time lets you maintain enough moisture to ensure a solid grip.

History of the Shammy

The shammy was introduced at the 1977 Swedish Cup by the European divers. The Norwegian team handed a shammy to two-time Olympic Gold medalist Dr. Sammy Lee. He in turn, passed it to his diver, Greg Louganis. It became an instant hit. Dr. Lee quickly developed this product into a profitable business. In 1979, Dr. Lee launched “The Sammy Sport Towel business. Today, the “Sammy can be found at just about every diving competition in the world.

The shammy first started making its appearance in diving in the late 1960s and early 1970s. Divers from Norway and other European countries were using the shammy to dry off their bodies. This unique product — not nearly as bulky as a traditional towel — was a hit in the diving world, and has remained a staple ever since.

The original shammy was made from the skin of the chamois: A goat-like animal traditionally found in Europe and western Asia. In the 1970s, Japan produced a chamois made of a poly-synthetic material. The modern shammy (or aqua-towel) is made of this material.

Divers, swimmers, and water athletes of all types use the shammy. However, it is especially important in the diving community.

Taking Care of a Shammy

A shammy is relatively easy to take care of. The product will mildew quickly if you are not careful, but avoiding this is fairly easy. The best way to care for a shammy is to make sure it dries before you place it in a concealed environment.

Another way to prolong the life of your shammy is to let it dry flat. Shammy's dried this way become like a hard piece of cardboard. However, it will quickly revert back into a normal towel once immersed in water. Just make sure you don't fold or bend your shammy until it is moist again. This will help avoid cracking or ripping the cloth.

A shammy will often come in portable plastic cylinder-shaped container. After use, wring out your shammy, fold it, and place it back into the container. Wait until all water has evaporated before you place the cap back on the container. If you do place the cap on too early, the cloth can produce mildew.

To avoid mildew, and to keep your shammy smelling and performing its best: Clean it regularly. To clean a shammy, place it in a washing machine with traditional detergent, or hand wash it with soap and warm water. Just make sure to never place your shammy in a dryer! This will damage the absorbency of the material, and ruin your product.

Today there are a variety of “aqua-towels on the market. Each product comes with different size, shape, and color options. However they all serve the same function: To quickly absorb water off your body and keep you comfortable when outside the water. The cost is relatively minimal, and ranges from $10 to $20. Shammys can be found in most swim shops and online.

The shammy has become an irreplaceable piece of equipment that most divers feel they could not perform successfully without. Once you give it a try, you will quickly see why you don't want to be on the board without one!