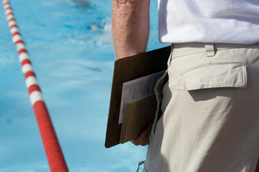 Four strokes, or styles of swimming, are contested at swimming meets: freestyle, backstroke, breaststroke, and butterfly. Swimmers race a variety of distances, ranging from 25 yards or meters to 1600 yards. Each stroke has specific rules as to how swimmers may propel themselves through the water.

Freestyle, often called the “crawl,” is the most flexible in its rules, and it is typically the fastest stroke. The only rules are that the swimmer may not push off the bottom of the pool or pull on the lane line, and must touch the far wall with some part of their body. Otherwise, swimmers may use any type of stroke. Freestyle is swum face-down with alternating arm strokes; side-breathing; and rapid, alternating up-and-down kicks. Freestyle races begin with swimmers doing forward-facing dives from either a starting block or the side of the pool. In multi-lap races, swimmers can do either an open turn or a flip turn. When doing a flip turn, the swimmer does not touch the wall with his/her hand. Instead, the swimmer’s feet touch the wall. At the finish, freestyle swimmers touch with one hand.

Backstroke is often thought of as “upside-down freestyle.” As in freestyle, backstroke is swum with alternating arm strokes and rapid, alternating, up-and-down kicks. Unlike freestyle, the swimmer must be on his/her back, facing the sky. When swimmers turn their shoulders more than 90 degrees, they are disqualified from the race for not remaining on their backs. The only exception to this rule applies to the flip turn in multi-lap backstroke races: Swimmers may turn onto their stomachs for one arm pull, provided their arm movement is continuous. When their feet leave the wall, swimmers must be on their backs. Backstroke races start with swimmers already in the water. Swimmers place their feet against the wall, and hold onto either the gutter or the grip built into the starting block. At the finish of the race, backstroke swimmers must stay on their backs until they touch the wall, ideally with one hand.

Breastroke is often thought of as the “frog stroke,” as the kick is reminiscent of a frog’s kick. A breaststroke swimmers arms and legs must move simultaneously, on the same horizontal plane, and identically to each other. The arms and legs stay mostly underwater, but a swimmer’s head must break the surface every stroke. So-called scissor kicks are not allowed. The arm stroke begins and ends in streamline position. The hands scoop water out to the sides, before sweeping in toward the middle of the body and then shooting forward. Swimmers are not allowed to pull their hands down past their hips, and must keep their elbows in the water when their hands are shooting forward. On the breastroke kick, swimmers must point their toes out to the side as the feet sweep out, around, and back together. For every arm stroke there must be one, and only one, kick.

Breaststroke races begin with a forward-facing dive from either the edge of the pool or the starting block. At the beginning of each lap, swimmers may do one pull-down: one huge pull, in which the hands sweep down to the thighs, and one giant kick to the surface. On the first stroke after the pull-down, a swimmer’s head must break the surface of the water. Today’s swimmers are also allowed to do one dolphin/butterfly kick in the first part of the pull-down, before the first breastroke kick. At the end of each lap of a breaststroke race, swimmers must touch with two hands, simultaneously and on the same horizontal plane. In multi-lap races, swimmers will use open turns, not flip turns.

Butterfly emerged as a new stroke in the 1950s, as swimmers were trying to find ways to swim breastroke faster. The two primary innovations were the double over-the-water arm recovery, and the dolphin kick. Butterfly is swum with an undulating, dolphin-like movement at the surface of the water. The arms pull underwater simultaneously, and recover over the water, also simultaneously. Both hands must come out of the water at the same time on every stroke. During each arm pull, swimmers do two dolphin kicks, one when the hands enter the water, and one when the hands exit the water. A swimmer’s feet must kick up and down together, ideally with the feet kept close together. While the vast majority of swimmers lift the head and shoulders to breathe, some swimmers breathe to the side, as in freestyle.

Butterfly races begin with a forward-facing dive, and swimmers must finish each lap by touching the wall with two hands simultaneously, on the same horizontal plane. At the beginning of each lap, swimmers will do underwater dolphin kicks, but must break the surface of the water with their head at or before 15 meters. In multi-lap races, swimmers will do open turns, as opposed to flip turns.

The individual medley, or IM (pronounced “eye-em”), is a race in which the swimmers swim each stroke for one-fourth the total distance of the race. During each portion of the event, swimmers must swim the strokes legally. For example, swimmers must finish the butterfly and breaststroke laps with two-hand-touches and finish the backstroke lap on their backs. They must also swim the strokes in this order: butterfly, backstroke, breastroke, freestyle. IM events begin with a forward-facing dive.

In a relay, four swimmers compete as a team. A swimmer may swim only once in a relay, and must swim one-fourth the total distance of the race. In a freestyle relay, all swimmers swim freestyle. In a medley relay, each swimmer swims a different stroke. In a medley relay the strokes must be swum in this order: backstroke, breaststroke, butterfly, freestyle.

Freestyle relays begin with a forward-facing dive, while medley relays begin with a backstroke start. All the other swimmers in a relay can begin with a “rolling” start, provided they do not leave the blocks before their teammate touches the wall. (In a rolling start, swimmers stand at the back of the starting block, and generate momentum by swinging their arms, and taking a step to the front of the block.)

The above rules are a general summary of competitive swimming rules, which can vary in their details according to the governing body for a particular meet. For detailed rules try these resources:

How many individual events are allowed international swimming???
7 months ago.

How many individual events are allowed international

I am 86 years old. I want to compete again in Masters Meets in the Breaststroke. Are the rules any different for my age?

Can a swimmer ask for some time allowance just before a race.? Or does it need to be an emergency only.? If it is allowed how long is it allowed.?

It is only for emergency cases.

What causes time penalties rather than DQ in a heat

what happens if you cant do a perfect butterfly kick do they not let you on the team or do they keep you on the side to keep practicing.

I would say the latter one. But it does not matter because the important thing is that you can have time to perfect the technique. A little progress each day adds up to great results.

Hi. Are swimmers in the pool, for any race, allowed to wear a watch? Is there a penalty for wearing a watch that is not a pacing device?

There was some confusion when USA-Swimming added language to their disqualification section “102.10.10 (DISQUALIFICATIONS) No swimmer is permitted to wear or use any device or substance to help his/her speed, pace or buoyancy during a race.” Questions were raised about considering wrist watches as “pacing devices”.

Can you wear a tie back in a swim meet

No fastening system (e.g., tie-backs, zippers, etc.) are allowed in competitive swimming in order to minimize the chance of wardrobe failure during a race.

Freestyle, often called the “crawl,” is the most flexible in its rules, and it is typically the fastest stroke. The only rules are that the swimmer may not push off the bottom of the pool or pull on the lane line, and must touch the far wall with some part of their body. Otherwise, swimmers may use any type of stroke.

a swimmer
1 year ago.

how do you prevent your goggles from falling off in a dive?

tuck them into a cap or put on a cap and then the goggles and then another cap on top.

a swimmer
2 years ago.

What kind of dives are used to start a IM race?

can you flip in a IM breaststroke?

no you can not do a flip turn of any kind in an IM event.

The push off on the back is no longer OK for freestyle in the IM and medley relay. Note that this interpretation applies to only the freestyle leg of the IM (any distance) and the medley relay (any distance), and the rules do not allow backstroke, breaststroke, or butterfly on that leg of either event. Backstroke is defined in USMS 101.4.2 as "shall push off on the back" and is therefore not allowed during the freestyle leg of the IM and medley relay because that is a clear definition of backstroke.

Pay attention.
Qoute from Fina (20171107): Leaving the wall on the back during the freestyle portion is permissible but no kicking action is permitted until the swimmer has returned past the vertical to the breast at which point kicking, including a butterfly kick(s) may commence.”

I heard that in breaststroke 3 dolphin kicks were allowed now, true or false ?

We did not receive any update about the breastroke swimming. We'll keep this article posted once we receive the updated rules and regulations.

after each turn a single butterfly kick is permitted