How to Stick a Late Drop in Surfing

It can’t be considered progressive or groundbreaking, and it probably won’t even raise much attention when it’s done right. Nonetheless, being able to cleanly stick a late drop on a wave of consequence is one of the finer arts of surfing. 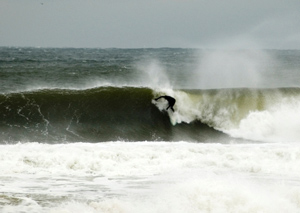 Consider this frequently reoccurring scenario: the wave of the day approaches and the rest of the lineup is out of position, leaving you alone to catch this beautiful, unspoiled offering from mother ocean. Only problem is, you’re a bit too far inside to relax and stroke into the wave comfortably, meaning you have two options: let the wave go unridden or try a late drop and secure your place in the day’s history as the one who got the wave of the day. No brainer, right?

Your positioning in relation to the wave is going to dictate how hard you need to paddle, but keep in mind that the sooner you can get into the wave, the easier time you’re going to have dropping into it. Obviously, if the drop is happening very late, you may not have time to give more than a few strokes before you need to push up to your feet. However, if you’re a bit too far out the back, you’ll need to scratch like a madman for the wave to let you in.

The Accelerated Push Up

Once you’ve caught the wave, the next course of action is an accelerated push up. Basically, you’re doing the same thing you do every time you stand up on a wave, only faster. Don’t rush so much that you lose your footing, but try to pop up as quickly as possible to give yourself time to negotiate the drop. Some surfers will give a quick glance down at their feet as they push up in order to make sure they get their feet in the right spot. If you do give your feet a look, remember to do it quickly – the next phase of your drop is all about vision.

Throughout the drop, it’s important to keep your head up and your eyes locked on where you want to go. Because everything happens incredibly fast during a late takeoff, you need to be aware of what the wave is doing at all times in order to adjust to its subtleties. For example, if the lip is pitching in front of you, you’ll need to pull in or go around it.

Keep Your Weight Back

Once you’re on your feet and beginning to drop over the ledge, the trick to sticking the landing is all about weight distribution. Stay low, bend your knees, and keep your weight focused on the tail of the board to avoid pearling the nose. The angle of your drop, and thus your weight distribution, will depend on what the wave is doing. If you need to get moving down the line quickly, you may need to put more weight forward in order to set your rail.

When a wave becomes so steep that the bottom drops out and the lip pitches, your board may actually disconnect from the water's surface, resulting in an air-drop. Don't panic; stick the landing using the same principals as any late drop: stay low, eye the landing, bend your knees, and brace for impact.

As you come out of your drop, it’s crucial to set up a bottom turn that will set you up for the next section – don’t forget that you’ve still got a wave to surf. Adjust your bottom turn appropriately. The wave will determine whether the turn is long and drawn out or just a quick adjustment of the inside rail.

Stick it, Then Surf it 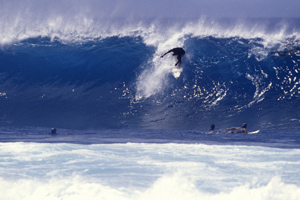 Late drops are difficult. Even the best surfers in the world wipeout on their takeoffs from time to time – some waves simply cannot be paddled into and ridden.

Don’t get discouraged if your initial attempts at critical takeoffs seem more like suicide missions than anything else. Eventually you’ll come out of a late drop unscathed, and it’ll make the rest of the session that much more memorable.