How to Do a Combined Spin in Synchronized Swimming

The combined spin is currently a required element for tech solos and will continue to be mandatory at least through 2013. In the past, it has also been (and definitely could be again in the future) a requirement for other technical routines.

Its place as a required element is not the only reason to learn how to perform a combined spin. It will also add interest and difficulty to free routines and teach you to control your water levels and body position during a more difficult maneuver.

Here's a guide to the downs and ups of combined spins.

What is a Combined Spin?

The combined spin is, most basically, a spin that descends to the ankles and then ascends back to the original height with the same number of revolutions done on the way down as on the way up. It's usually done in a vertical position, but there are plenty of other variations that could be used as free routine choreography.

“Combined Spin is executed. A descending Spin of 1080° (3 rotations) followed, without a pause, by an equal ascending Spin in the same direction. [DD 3.0]

The version required for technical duets from 2001-2008 is the bent knee vertical (or heron) combined spin. It starts in a heron position and joins gradually to a vertical while spinning down. Then, on the way back up, the initially leg will again begin to bend. Your maximum height and final heron position occur simultaneously, just as you stop turning.

Although it's not a requirement anymore, it looks cool and could make an interesting addition to any routine. Or, maybe it will just give you inspiration to create your own version.

Start at Your Height 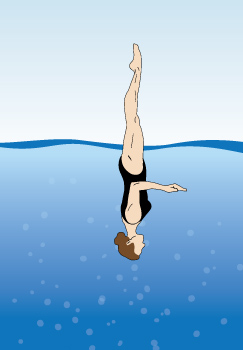 By definition, a descending spin has to descend, so avoid starting out at a water level that is too low and floaty for you. This will leave you wobbling around instead of spinning down. Since you should end the entire spin at the same water level at which you began, starting out at the highest level you can hold will give you the opportunity for an impressive finish.

Needless to say, you should use support scull to keep your height.

Count Down… and Up Too 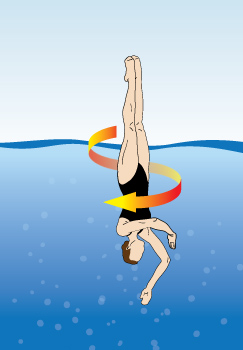 For example, if you choose to do three spins down and three spins up, you will need to divide up your water levels into thirds. So, if you start at mid-thigh, the first 360 degrees should take you to just below your knees (knees underwater). By the time you finish the second 360, you should be at your mid-shin level, and then finish your third 360 at your ankles.

The water level at your ankles should hit right at your ankle bones without letting your heels touch the surface. 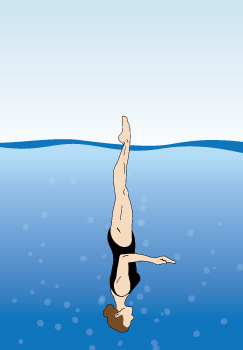 Obviously (and hopefully) you will be starting in support scull. Choosing the best transfer-to-spinning-scull technique depends on how much you float and how many spins you are going to try to squeeze in before you hit your ankles:

When you have a half-turn left before arriving at your ankles, switch back to support scull in order to “catch yourself. If you skip that catch, there's a good chance you'll fall right through your last water level.

Hot Tip: Clarity without A Pause

Combined spins should technically not have a pause at the bottom—you should just keep on spinning until the very end. But, it should be very clear when you are done descending and on your way back up.

To make this change in direction more clear, it is important to divvy up your spinning proportionally as you descend. Leaving too much spinning to do at the lower water levels will make the switch too vague. 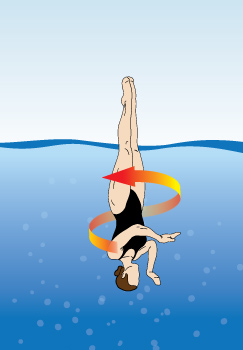 Technique and vertical alignment are key to the successful completion of the combined spin, as the spin back up can be difficult.

1. Your hands should start in support scull, since you just finished your catch.

2. Still using support scull, continue turning and adding pressure to your scull in order to rise. If you're floaty enough, you can even turn your right hand completely over to push more water and spin faster.

3. Stretch both sides of your body evenly and make sure that your eyes, shoulders, hips, and feet are all arriving at the same wall at the same time. A common mistake is to crunch the left side of your waist in a desperate attempt to spin faster, but this will actually end up causing more drag as you spin. 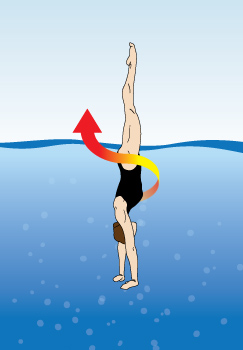 4. Just before you reach the last wall and your full height, press your arms overhead. Be careful to get both arms all the way around. Dragging your right arm behind will leave you without support and tipped over on one side.

Whether you need to learn it for your technical solo or want to put it into a different routine, the combined spin is a valuable skill to know. It will help improve your spinning technique and challenge your vertical alignment to make you an all-around better synchronized swimmer.

After all, the more synchro skills you have, the more opportunity you have to choreograph interesting, difficult routines.