If you have ever watched a diving event on TV you probably remember hearing the announcer call out a number prior a dive. For example, in the Beijing Olympics you may have heard the announcer say, "Laura Wilkinson performing a 107B forward-three-and-one-half somersaults pike, 3.0." All those numbers may seem arbitrary or even confusing, but in diving each number is a specific dive and each dive has a specific degree of difficulty attached to it. Far from arbitrary, each number in a dive description indicates everything about that specific dive. 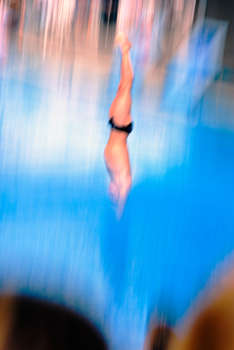 All dives are categorized into five main groups: Forward, backward, reverse, inward, and twisting. There is also a sixth group in platform diving: The armstand group. Every group of dives is assigned a number.

Dive numbers are either three or four digits long. Each number in the dive represents a particular aspect of the dive; the direction it will go and how many somersaults and twists it will have.

The Number of Somersaults

The numbers start with the 100s. Any dive or somersault that leaves the board or platform in the forward position is classified as forward and given the group number one. The diving number for the forward group is three digits long. The first number indicates the group, the second number is usually a zero (except when a dive is a "flying" dive, and then the middle number is one), and the third number is the number of half-somersaults in the dive. Thus a 101 is a forward dive; a 102 is a forward somersault and a 113 is a flying one-and-one-half somersault.

Position of the Dive

Each dive is then given a letter that corresponds to it. The letter indicates the position of the dive.

Twisting dives are slightly different. Twisters have four digits associated with them.

Armstand dives either have three or four digits depending on if they have any twists involved. The armstand group starts with the number six. For non-twisting armstands, three digits are used. The first digit is a 6 indicating an armstand, the second number indicates the direction; either forward (1), backward (2), Reverse (3) or Inward (4). The third number indicates the number of half-somersaults. For example:

To further complicate the number game, each dive is given a specific degree of difficulty (DD).

In 1989 at the Olympic Festival in Oklahoma City, Mark Lenzi had just learned a forward four-and-one-half somersaults tuck on 3-meter. The unprecedented dive had a 3.5 DD. Although he could do the dive great, he was not consistent. In the competition, he performed the dive poorly for fours.

Three years later at the Barcelona Olympics, Lenzi opted to use his 107B, forward three-and-one-half somersaults pike which has a DD of 3.1. He performed it beautifully for nines and he went home with an Olympic Gold.

For example, a 101A (forward dive straight) has a degree of difficulty of 1.4, but a 101C (forward dive tuck) has a DD of 1.2. At all competitions, a DD chart is given to the diver when he/she is filling out a diving list. The DD is important because it is the number by which the score is multiplied. A higher DD will usually mean a higher score, but not necessarily.

The diving numbers may seem confusing at first, but in time it becomes easier to understand. Just remember that every dive is assigned a number describing every element of the move, and each dive is given a specific DD. If you can keep those two things in mind, understanding the diving numbers becomes a lot easier.