Why You Need a Triathlon Wetsuit to be Competitive! 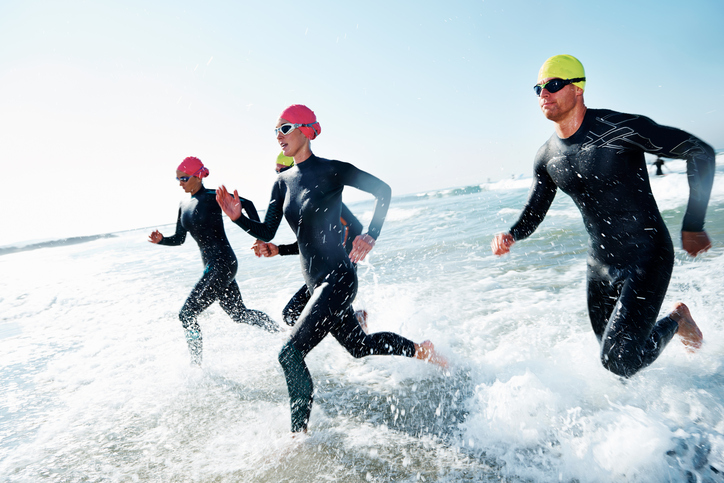 If you want to compete in a triathlon, you know you need a wetsuit to keep you warm and competitive. However, you may be tempted to buy a general wetsuit and use it for both your swims, surfs, and the triathlon in order to save money. While there is no rule in a triathlon against using a general wetsuit, if you truly want to get the most of your wetsuit and perform your best, you really need a wetsuit dedicated for those events.

A triathlon wetsuit is generally made with thinner materials than a surfing wetsuit, since it is designed to be worn where swimming quickly and fluidly is a higher priority than keeping warm. Of course, if your triathlon is going to involve swimming in cold waters, then you definitely should take a heavier wetsuit to keep yourself warm, but if the water is warmer, you will want a wetsuit designed specifically for triathlons.

Surf wetsuits are designed to withstand harsh rocks and unexpected conditions and situations, neither of which will be much of an issue in a large scale triathlon, and that added durability and thickness of material will only slow you down in an actual race. It will also potentially overheat you if the water is too warm for your wetsuit. Because surfers do not move as much as a swimmer in a triathlon, they need thicker materials to stay warm, while a triathlon swimmer will keep his body warm simply by swimming enough.

Many triathlon wetsuits are built for one thing and one thing only--speed. This means that they repel the water and keep the suit extra smooth, allowing for as little resistance as possible when you move through the water. Not having this slick surface can make or break your performance during the swim portion of the triathlon, and when every second counts, it's important to give yourself every advantage you can.

Unlike the previous two points, this one is actually an advantage for swimming a triathlon but works against you when surfing. The lack of inner lining makes the triathlon wetsuit less resilient to the elements, specifically rocks and rough conditions while surface. This is to keep the suit thin and slick, but when you are braving harsher conditions, the suit won't offer much protection and is more likely to tear.

Quick to Take Off

A triathlon wetsuit is designed to be removed quickly, since it is imperative that you transition from the swim portion to the next portion as quickly as possible. A surf wetsuit has one zipper in the back (or front) and is not particularly easy to grab and take off. A triathlon wetsuit, on the other hand, is made to be taken off quick, sometimes even having removable arms and legs to get you back in the race faster than ever!

If you are serious about competing in a triathlon, then you need a triathlon wetsuit. The advantages it gives you cannot be understated, and while a surf or a general wetsuit can give you some of the benefits, it simply does not have what you need in order to compete at the best you can. When you get a triathlon wetsuit, you'll feel the difference immediately and start to perform better.

What are you waiting for?