A counterattack is one of the most exciting moments during a game of water polo. Immediately after the ball changes possession, the defensive team transitions to the other end of the pool to play offense. As the offensive players rush to the opposite end of the pool in hopes of getting open to score, the defense races back as well to prevent any shots. This guide covers the most important aspects of a counterattack for both offense and defense.

Each team has 30 seconds in which to score during their time on offense. That means that as soon as the ball changes possession and a new shot clock starts, they need to get to the other end of the pool as quickly as possible. If performed correctly, it may be possible to score right off the counterattack on a breakaway. If a quick goal isn't scored, there is still the chance to set up the offense and run plays for the remainder of the shot clock.

Shifting from defense to offense takes coordination, communication, and awareness of the ball at all times. The following strategies will help you and your team execute counterattacks that are efficient and effective.

Hot Tip: Keep Your Head Up

It is crucial to know where the ball and your teammates are at all times during a counterattack. No matter your position in the water, never put your head down. It is too easy to miss a pass or swim right by a ball that has landed nearby.

Know Where to Go

Your personal counterattack path will change depending on where you were playing defense before possession changed. The general guidelines are as follows: 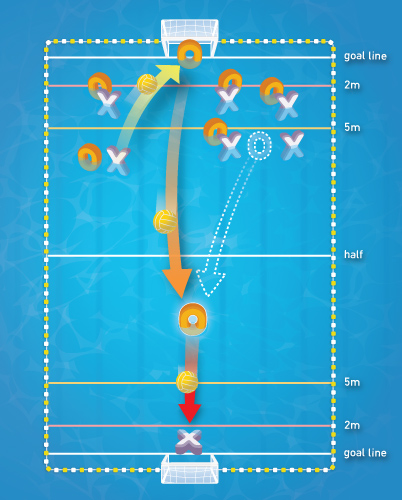 That transition is not, however, set in stone. Someone from the back of the pool may be able to get in front of their defender, forcing the rest of their teammates to move away from the middle of the cage. The open player should always be given access to the front and center of the cage on a counterattack, so it is important to practice different counterattack possibilities.

A counterattack begins when the defense gains control of the ball from the offense. The person with the ball (if they are not the goalie) can either pass it to the goalie and begin to counterattack, or make a pass to a teammate who is counterattacking. Players who were guarding the sides — wings and flats — are responsible for winging out to get open for this pass.

The best way to wing out is to swim out to the pool's halfway point in the direction of the opposite cage, then make a 90 degree turn and take a few strong strokes toward the side of the pool. Those strokes can be taken as head-up freestyle or backstroke, though your coach may prefer one to the other. This should create a good amount of space between you and your defender. Look back to the goalie for the pass.

As soon as you have the ball, look towards the goal or down line for an open teammate. It is faster to pass the ball down the pool than swim with it, so make a pass whenever possible.

Counterattacking with a Breakaway

A breakaway is the objective of any counterattack. The best possible odds for making a shot are one offender versus the goalie. Each defender added to that equation makes it harder to score a goal, even if there is another offender there as well.

If you are the first player down the pool and in front of your defender, you are on a breakaway. As you swim to the cage, glance behind to see where the ball is. If the ball has been passed to a player on your side of the pool, keep swimming to the center of the cage and expect a leading pass. When the ball lands on front of you, take the best possible shot on goal — wet if your defender is close, dry if you have room. If no pass comes, swim out to a wing position to open up the area in front of the cage for another player.

Stay aware of the shot clock while on defense. If there are just a few seconds left and you feel confident your player won't be shooting, start your counterattack early for a possible breakaway.

Counterattacking Without a Breakaway

If the first player down the pool is not able to beat their defender, it is still possible to score off the counterattack. As one of the flat guards wings out and receives a pass, the player behind them should swim past them straight to that side of the goal. Once they are down line, they can receive the ball and shoot (if in front of their defender), or pass it to a different teammate in a better scoring position.

Lastly, if no one is able to get around their defender on the counterattack, your team can still work the ball down the pool as described above. Then set up a normal offense and run plays until you score or the shot clock runs out.

The focus of the defense during a counterattack is simple: Get between the other team and the cage. Letting an offender get in front of you on a counterattack is basically allowing them to take a free shot. Most of the time you will guard the player who was just covering you, but you may have to shift to another player in the water as the counterattack plays out. No matter who you planned on guarding, the biggest threats — the players closest to the middle of the cage — need to be covered first.

If you were in a flat or point position, you are the first line of defense. It is your responsibility to cover the first and probably fastest players on the opposing team to counterattack. The rest of your teammates will fill in the gaps accordingly as you concentrate on the biggest threats.

Though it is tempting to put your head down and sprint in order to beat the offense, you should keep your head up. This allows you to stay aware of which players need to be covered and where the ball is. If a bad pass lands near you while your head is down, you've just lost a steal.

Counterattacks can be hectic, since every player in the pool is racing to a new position and every person on the pool deck is probably calling out instructions. Remembering to look at your teammates and knowing the location of the ball are the two most important things you can do.

As the counterattack progresses, good players will constantly shift to make their team's offense as effective as possible or defend the greatest threats. Practicing counterattacks — both offensively and defensively — is important for every team and it will pay off in the end. One of the greatest feelings in water polo is a seamless counterattack that results in a goal.