Surfing Guide to the North Shore

No place on earth is closer to the heart and soul of surfing lore than the North Shore, located on the Hawaiian island of Oahu. Known to the surfing world as “the seven mile miracle,” Oahu’s north shore provides an astounding array of world class surf, all condensed into a single stretch of beach, from Kaena Point on the southwestern end to the Velzeyland, located near the northernmost tip of the island. 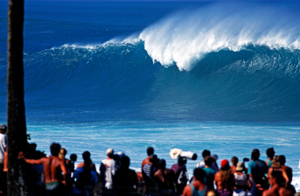 From October through March, winter storms generated in the North Pacific Ocean send an abundance of powerful swells to the North Shore, where they’re greeted by light trade winds and perfect reef and beach breaks. Here’s a breakdown, from South to North, of the famed surf spots of Oahu’s North Shore.

Driving northwest from town on the Kamehameha Highway, the first spot you’ll come across when you reach the coast is Haleiwa. On the western edge of Haleiwa town is Haleiwa Ali’I Beach Park, with Puena Point to the north and Avalanche reef to the southwest. The main surf spot at Haleiwa is formed by a V-shaped reef that produces a bowled-up right that races towards the inside section known as the toilet bowl.

A clean west swell is preferred, although anything out of the northwest will provide fun surf. With size, Haleiwa produces a few nice barrel sections, and when it’s smaller, a left breaks in the middle of the reef. In sizable conditions, watch out for a strong rip current that will place you directly in the impact zone.

A few miles up the road from Haleiwa lies the right-hand reef break at Laniakea. Although Lani’s will break on most winter swells, it only shows its true face on a clean, six-to-eight foot north swell. On such occasions, the rights at Lani’s are some of the North Shore’s finest, with long, tapered walls providing fast and hollow waves that can run for several hundred yards.

The world’s most famous big wave spot is located in an idyllic bay about a half mile across, with several surf zones including the main break, the legendary Waimea. On smaller winter swells, a section known as Pinballs provides fun right-handers that can throw up an occasional barrel or two. Beyond 10 feet, waves break outside of Pinballs, although true Waimea doesn’t come alive until it’s a proper 15 feet. From 15 and upwards, an underwater lava rock ledge focuses the deep water energy into a heaving peak that thunders across a section of reef before flattening out towards the channel.

Days that hover in the 15 foot range routinely draw ridiculously thick crowds, but when the buoys start topping 25 feet, only the true hell-men remain in the lineup. And while legends are made at Waimea, it’s also true that lives have been lost. As with any big-wave venue, the Bay commands the highest level of respect, and can turn one man’s dream into another’s nightmare.

A string of rock and sand bottom breaks line the area known as Log Cabins, which varies from fun, wedging peaks on small days to crazy death-pits of over-exposed rock on larger swells. The offshore reef known as outer Log Cabins is notable for producing some of the largest waves ever ridden during a swell in the late ‘90s.

A fickle right on the western end of the Backdoor Pipeline reef, Off-The-Wall is essentially a closeout barrel that can occasionally provide a makeable right-hand tube for those unfazed by impending destruction. The Off-The-Wall reef was hardly surfed until 1975, when a string of perfect northwest swells sent legendary surfers Shaun and Michael Tomson, Mark Richards, Dane Kealoha, and others to sample the perfect tubes on offer. After photos of those sessions circulated around the surfing world, Off-The-Wall became a surfing fixture, and continues to attract the photo-minded pro or those looking to escape the massive crowds at Pipeline.

Backdoor is the name given to the right at Pipeline, and although it was largely ignored during the original Pipe era, today it isn’t far from being an equivalent of the world’s most famed surf spot. Backdoor breaks on a fractured swell line that pops up between the Pipe reef and Off-The-Wall, and can produce thick, square tubes – most of which end in a closeout on shallow reef. Because Backdoor lacks a large deep-water channel, getting caught inside here can be a hairy experience.

No other wave in the world commands more attention – from inside and outside the surf world – than the famed Banzai Pipeline, and for good reason. Capable of producing an almost impossibly large, cylindrical barrel, Pipe has tested the skill and courage of the best surfers on the planet for nearly four decades. On a 10 foot west swell, the lefts at Pipeline are unprecedented in both perfection and danger. On lower tides, a jutting lava reef lies mere inches below the water’s surface, and more than a few top-level surfers have been rescued by the always-vigilant lifeguard team that patrols the area. 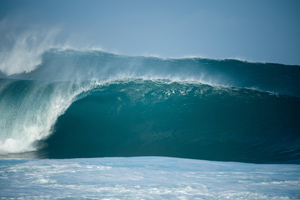 The power produced by even a moderate swell at Pipeline is astounding, as deep water energy compresses and pitches violently over the reef. Ridden up to 12 feet, or about triple overhead, Pipe turns on when the sand buildup on the inside section is cleared and the left becomes one monstrous barrel, heaving and spitting violently towards the beach.

Probably the most consistent break on the North Shore, Rocky Point is both a right and left that can offer fun waves as small as chest-high and as big as a few feet overhead. The curving reef at Rocky Point can produce a peak that peels in both directions, although the preferred wave is Rocky’s Left. Depending on swell direction and size, Rocky Point varies from one of the most high-performance waves on the planet – attracting visiting pros and locals alike – to a mellow shore break.

Sunset Beach is the original focal point of the North Shore, a place where the sport’s first class of legends came of age. It is also one of the most varied surf zones on the planet, with several sections – from Kammieland to the west, past Sunset Point to the north – that offer an array of waves that vary on swell, tide, and conditions. The main reef alone consists of several different take-off spots, and can hold wave sizes of up to 12 feet. Bigger swells can be as rewarding as they are challenging; a single session can provide either the wave of your life or the most brutal punishment you’ve ever experienced – or both.

The heavily localized break known as Velzyland, also called V-land, lies just north of Sunset Beach and is home to a large community of local surfers who are on it whenever it’s breaking. The wave itself is a bit fickle, but on a good day, V-land produces fun, tapering right-hand barrels that peel over a shallow rock reef.

The Importance of Respect

The significance of Oahu’s North Shore to the surfing world is immeasurable. The “seven mile miracle” is deeply rich in tradition and history, and houses some of the best surfing waves on the planet. Thus, the legacy that is the North Shore demands the upmost level of respect. As a visiting surfer paying homage to its beaches, it is imperative to show respect at all times, for both the place and the people who live there.