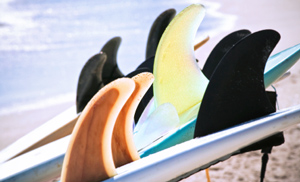 Fins are without a doubt one of the most important aspects of surfboard performance. Before the first fins were attached to boards in the 1930s, surfers had to drag a foot in the water in order to turn — which is great for developing stellar balance, but not so great for carving up a wave.

Fins impact the stability, responsiveness, speed, and general feel of your surfboard. So if you want to take your surfing to the next level, it’s critical that you understand how fins work and how various fin types can influence your surfing.

Surfers also have two options regarding the type of fins found on their board: Removable, and glass-on.

The majority of boards these days have glassed-in fin boxes or slots into which fins slide with screws used to hold them in place. This allows you to switch fins out easily and remove them for travel. Despite the convenience, however, some shapers and expert surfers are convinced that removable-fin systems limit board performance.

A glass-on fin is laminated to the surfboard. For that reason, attaching the fin to the board is an art in itself. The amount of cloth used to set the fin in place, as well as where the material is built up at the base of the fin and how the area is sanded and glassed can all impact board performance. Some surfers think that glass-on fins enhance their surfing and make the board and fin feel more integrated. Most pro surfers have fins that are glassed-on.

The shape of the fin plays a big role in how it will function: 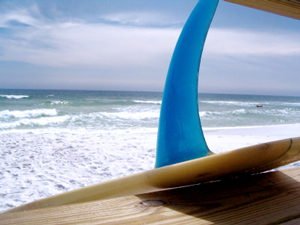 Subtleties in how a fin is positioned on the board also impacts how a board will surf:

How much a fin flexes and the way it flexes are often overlooked characteristics that can have a huge effect on board performance. A softer fin tends to be favored by lighter surfers in small waves, whereas heavier surfers generally prefer a more rigid fin — especially in larger waves. In addition, the quality of the flex, the amount of torsional flex, and how quickly a fin rebounds can also have an impact on how a board feels.

A significant number of surfers have suffered puncture wounds and eye injuries from standard surfboard fins — either from their own board or as a result of collisions with other surfers. In response, a few fin manufacturers began producing fins that have a rigid body, but a soft urethane edge. Some surfers swear by them and others don’t like the way these safer fins affect board performance. Functionality aside, soft edge fins have helped cut down on the number of surfing-related stitches and eye surgeries.

The number of fins on a board, where the fins are placed, and the total surface area of the fin(s) can have a significant impact on board performance:

Since there are so many variations of board shape and size, it’s difficult to say which fin types and configurations will work best for your weight and surfing style, and the type and size of waves you surf most. As a result, even if you’re happy with your current fin set-up, it may be worth experimenting with some different variations to see if there’s a better option for you. If nothing else, trial and error will make you more aware of your equipment and will help to improve your surfing — which in turn, equals more fun!