How to Survive a Surfing Wipeout

Most surfing wipeouts are hardly extraordinary, or even dangerous. Nine times out of ten, a wipeout is more akin to launching a flying squirrel off the diving board than, say, plunging backwards from the coping of an eight foot half-pipe while skateboarding. After all, it’s only water, right?

Let’s not forget about the one time out of ten. It’s the terrifying moment that leaves us wondering how we ever got talked into this surfing thing in the first place, and although it is indeed rare, it’s also unavoidable. Going face-first into the reef, taking a 10-wave set on the head, getting rag-dolled beneath a malevolent closeout – these are a surfer’s true test of strength, skill, and will-power.

Before we delve any further into the scenarios that may arise before, during, or after a wipeout, let’s go over some basic rules of prevention:

Wipeouts can happen in a number of waves and for a number of reasons. One of the more perilous yet common types of wipeouts is one in which a surfer goes over the falls, which refers to a free-fall down the face of a steep wave. A surfer usually falls victim to this minor catastrophe when attempting a late take-off, or when simply trying to avoid an impending wave and failing to get under and away from the wave’s energy. 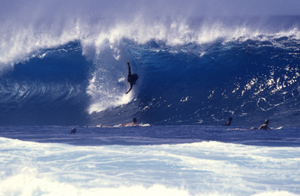 Getting sucked over the ledge can be a slightly terrifying, if not completely unnerving experience. At the point where the wave has locked you in its watery embrace with no intention of letting go, there is little to do aside from bracing for the imminent body-slam to follow. As mentioned earlier, it’s important to stay calm. Prepare for destruction by taking a deep breath of air, curling into the fetal position, and relaxing your muscles as much as possible.

Upon realizing that they’re completely and utterly under the control of the ocean’s force, many surfers’ initial reaction is understandably one of panic. As with any life-or-death situation, the feeling of total helplessness is always accompanied by alarm – this is natural. However, when in the throes of a severe wipeout, by far the most important tactic a surfer can employ is the ability to stay cool under pressure. Train your body and mind to replace panic with calm. Your body actually consumes more oxygen when it’s under stress than when it’s not, so being able to relax underwater will actually allow you to retain your air supply longer.

Furthermore, when you’re tossing underwater like a piece of laundry in a washing machine, there’s little to be gained by fighting madly against the energy. Instead, you need to wait out the storm. Let the wave’s kinetic force begin to die out before you begin your ascent to the surface.

It goes without saying that a huge wave will pack a huge punch when it comes to wiping out. We've all seen footage of guys taking the plunge at 12-foot Pipe or getting caught inside at scary-big Waimea, but few know what it actually feels like to get punished by such brutal force. Keep in mind that the surfers paddling out in such dangerous conditions know what they're up against, and they know the consequences. Leave the giant ones to the experts.

In many instances, there aren’t a lot of ways to avoid contact with the sand or reef bottom, especially if you’re surfing a shallow break. Although sand-bottom surf spots offer a bit more relief than a sharp coral reef, hard-packed sand can be about as soft as concrete. Just remember to protect your face with your arms and tuck into the fetal position. If you’re shaken up after getting friendly with the reef, don’t hesitate to take a wave in and collect your nerves on the beach.