How to Choose Fins for Shortboard Surfing 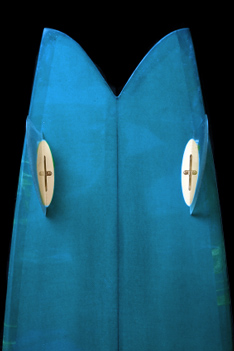 Shortboard fins are like the ozone layer of the surfing world. They are ultra important, but taken for granted by most. Fins influence the speed, stability, maneuverability, and feel of your board. They can transform both your shortboard and your surfing.

So if you’d like to kick your board’s performance up a notch, try experimenting with different fin setups, shapes, sizes, flexes, and positions. If the myriad of choices out there is making your head spin, you’ve come to the right place. This guide will aid you in your quest for shortboard fins.

Single-fin setups are relatively rare on shortboards these days — they’re mostly seen on retro designs. However, some surfers like the reduced drag of a single fin, as it helps them maintain board speed when they’re not working the board from rail to rail. In most cases, boards outfitted with a single fin are best suited for down the line, flowing surfing styles as opposed to the more vertical and modern slashing seen today.

Single-fin height can vary quite a bit on shortboards, but most retro board shapes need a fin that’s between 7 and 9 inches. The shorter the fin, the more prone a board will be to spinning out during an aggressive turn.

The shorter base, “cut-away” designs are common on single-fin shortboards. Longer-base fins with narrow and flexible tips are also used.

Move a single fin forward for a looser feel and shorter turning arc. Move the fin back for more hold in bigger surf, tube riding, and drawn-out turns.

The twin-fin setup can work well with both retro and more modern shortboard shapes. Two smaller side fins provide less hold, but produce more stability and less drag than one larger center fin. So this is a great option if you’re looking for speed and insane maneuverability. However, shortboards with twin fins tend to not be so stellar in big surf and can get squirrelly in the barrel. As a result, they’re generally best suited for small- to medium-sized waves.

Fin surface area in a twin-fin setup depends heavily upon tail shape, amount of board rocker, weight of the surfer, wave size, and surfing style. Larger surfers in bigger waves should go with deeper fins — 5.5 to 6 inches. Smaller, less powerful surfers who want a looser feel on a board with a more narrow tail can get away with smaller fins — 5 to 5.5 inches.

Fins with a little more sweep and a narrower base than they’re height tend to be the best fit for the twin-fin configuration.

Shortboards featuring twin fins normally work best with the fins placed relatively close to the rails and about a foot from the tail. 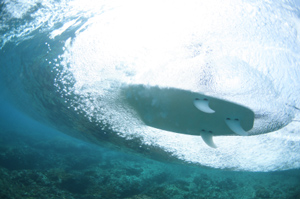 The thruster setup consists of three fins that are the same size. This setup is used with a wide variety of board types. It’s the most popular shortboard fin arrangement, because of its versatility — it combines the turning ability of a twin fin with the hold of a single fin. However, since thrusters create a lot of drag, they’re best suited for surfers who are constantly arcing and putting the board up on edge. So if you’re looking for a high-performance fin setup that will work well in virtually any condition and allow you to push the envelope of your abilities, this cluster is a safe bet.

The vast majority of shortboard thruster fins are between 4 and 5 inches deep, with a high percentage of those falling in the 4.25-to-4.75-inch range.

The fins used in the thruster setup generally have a base length that’s slightly shorter than the fin’s height. Since the side fins are typically toed-in, they are normally only foiled on their outside surface and flat on the inside. The center fin, however, is still almost always double foiled.

The most common thruster configuration has side fins placed roughly a foot from the tail and an inch from the rail, with a trailing center fin. Positioning the center fin a little farther from the tail will offer a looser feel.

Similar to the thruster, the quad setup is used on a wide range of shortboard designs. It’s also a popular cluster for big-wave guns, since the absence of a center fin equals less drag and more speed.

Although quads have a looser feel, the added surface area of four fins also results in the quad-fin configuration offering great hold. It’s no surprise that quads are gaining popularity with shortboarders who are looking for a high-performance alternative to the thruster.

There are a lot of different sized fins being used with the quad setup. However, the most popular depths tend to be between 4.25 and 4.75 inches for the lead fins, and 3.75 and 4.25 inches for the rear fins.

The lead side fins of a quad are normally foiled only on the outside and flat on the inside. The smaller trailing fins are generally double foiled.

The larger side fins of a quad are commonly placed close to the rails and toed-in a little more than the two trailing fins. The two fins closest to the tail are forced closer together as the tail of the board narrows. However, different tail shapes and bottom contours can require fin-placement variations in the quad setup.

Before the 1930s, all surfboards were ridden without fins. Today, some shapers are experimenting with finless shortboard designs by combining a variety of flex and shape characteristics, including deep channels, heavy concave, and unique rail features. Some who have tried them say that finless shortboards are the future, because there is none of the drag that’s normally caused by fins. Others feel that, despite finless models being faster, they don’t work in a lot of conditions. Either way, finless shortboards appear to be more than a passing fad and you need to try one out before passing judgment.

The twinzer setup is similar to the quad in that it employs four fins and is also seen on a wide variety of board designs. However, the way twinzer fins are configured results in board performance characteristics that fall somewhere between a twin-fin and a quad. Twinzers are a great option for certain board shapes to be used in medium-sized surf — they offer more hold than a twin-fin, but generally not as much as a quad.

Twinzer side fins are normally around 5 inches deep with lead fins that are around 3 inches deep.

The base length of all four twinzer fins is typically slightly shorter than each fin’s height.

Twinzers generally consist of a small lead fin placed directly in front of larger side fins. All four have similar toe-in angles. As with quads, different tail shapes and bottom contours sometime require fin-placement variations in the twinzer setup.

Fin setups with more than four fins are normally similar to either quad or twinzer configurations, with the addition of a center fin and/or more side fins. Although some of these multiple-fin clusters can look funky, they can also have value.

When smaller fins are used with these setups, they can result in the same amount of total fin surface area as a cluster with fewer fins. Ultimately, the end result and impact on board performance will depend on the shape, size, flex, and placement of the fins.

Once you get your fin setup, size, shape, and basic positioning nailed down, the next step is to experiment with different flexes, foils, toe-in angles, sweeps, and cants. All of these fin characteristics will affect board speed and responsiveness. However, these decisions tend to be very subjective and are difficult to make out of the water. In other words, do some field-testing and take note of how the board feels and performs in a variety of conditions. This is the best way to dial in your fin preferences even more.

If you ever inherit a shortboard and the previous owner tells you "it doesn’t work,” try some different fin setups. Chances are that you’ll eventually find just the right combination of fin placement, size, shape, and flex to turn an unwanted clunker into a rock star!