How to Choose Fins for Longboard Surfing 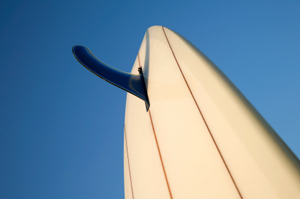 Fin selection can make or break the way a longboard performs. Choosing the right fin setup and design can mean the difference between fun and frustration.

There are several factors that influence how well a fin will work. Things like board shape and size, surfing style, and wave type will all play a role. If you’re unsure as to whether your longboard and fins are a match made in surfing heaven then read on, as this guide will break down your fin options.

A single fin is the most classic and traditional longboard setup. It provides stability while also giving the board a relatively loose feel. A lot of longboarders who enjoy drawn-out turns and noseriding choose this option.

The depth of a single fin placed in the center of a longboard can vary from 6.5 to 10.5 inches depending on board size and shape — as well as the application. A deeper fin will provide more hold than a shallower fin; and 9- to 10-inch fins generally work best for longboards between 9 and 10 feet long.

Longboard single fins come in a wide variety of shapes with various names. Popular designs are ones with a fairly long base and rake — the most common are the “longrake” and “hatchet” fins. This type of fin holds well in turns and when you’re on the nose. Longer boards in bigger surf tend to work best with a larger version of this fin design.

Move a single fin farther back for longer noserides and move the fin forward to loosen up the board.

The 2 X 1 (also known as the “2 +1”) setup consists of a center fin with two smaller fins placed to the side of it and slightly farther forward. This fin configuration can be found on longboards of varying lengths and shapes, but is most popular on high-performance models. The 2 X 1 allows for tighter turns and is generally preferred by longboarders with a more modern and dynamic surfing style.

Most center fins in a 2 X 1 setup are between 6 and 9 inches tall, while the two smaller side fins normally range from 2 to 4.5 inches deep.

A common design for the center fin in the 2 X 1 cluster features a shorter or “cut-away” base — generally better for more hollow waves and a more modern, high-performance surfing style. The smaller side fins tend to have a base length that’s similar to their height.

The center fin in the 2 X 1 setup is generally placed farther forward than a standalone single fin. This positioning makes the board quicker from rail to rail.

Fins with a hollow tube running through the center have been around since the ’60s. Manufacturers of tunnel fins claim that the design can enhance numerous aspects of longboard performance, including longer noserides.

Some longboarders swear by them and feel that tunnel fins do a great job of holding the tail of the board down when they move their weight up front. Other surfers, however, don’t care for them and/or are convinced that they only work on longboards that have very little or no tail rocker. The best way to find out if the tunnel fin design is a good match for your board is to give one a test drive.

The thruster setup is a similar configuration to a 2 x 1, except all three fins are the same size. This type of cluster is generally seen on high-performance longboard models. Boards with a thruster setup are generally preferred by longboarders who are looking for maximal maneuverability and surf with a much more active and vertical surfing style — up and down the wave face opposed to down the line.

The height of thruster fins on longboards can vary, but a common depth is around 4 to 5 inches for all three fins.

Fins used in thruster setups generally have a base length that’s similar to the depth of the fin.

A thruster’s center fin normally trails the side fins by several inches. A tighter cluster will result in a looser feel and allow tighter turns. A more spread-out pattern will be better for longer arcs.

Some shorter, lighter high-performance longboards work well with a twinzer, quad, or 5-fin setup. As with the thruster configuration, these options are best for modern longboard surfing styles. Board shape and length, as well as wave type and size will have a lot to do with which of these three options will be the best fit: 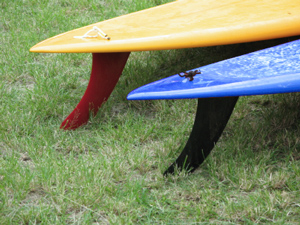 Longboard fins come in a lot of flex options depending on the materials used in construction. A stiffer fin will be more responsive, while a more flexible fin will be more forgiving. The optimal amount of fin flex for any longboard will depend on shape and length of the board, surfer weight, fin shape, surfing style, and wave conditions.

The cant of a side fin — or angle at which it’s placed in relation to the bottom of the board — will affect maneuverability, speed, and feel. Less cant will allow for more speed and will make the board feel stiffer. More cant produces more drag, but also enhances maneuverability while resulting in a looser feel.

The way a fin is shaped from front to back and how thick it is in the middle will affect how water flows around it. A fin with pronounced foil will create more drag, but will also provide more lift.

The fins you choose for your longboard become increasingly important as you improve your surfing skills. Experiment with different fin setups and designs on different board shapes in a variety of conditions. Over time, you’ll develop your own set of preferences and be able to feel how subtle changes can affect board function and your overall performance.

Thanks for the simple but informative explanation of fin set up on a longboard. Beats a lot of guess work!